Have you heard of this NEW GAME they installed on the high-tech computer at the library?  We've all played it!  You should too!  It's real cute!

She is a sweetheart!  A bright, young woman... who is looking for someone with a gentle touch!

She loves a GOOD BOOK, and she has always wanted to date a TALENTED ARTIST!

But she isn't into SPORTS so JOCKS... please do NOT APPLY!

Play your cards right, and you'll get a SMOOCH from the cutest person ever!

"Melissa ❤️" is a short retro tech horror visual novel, with a bit of comedy that taps into the general time period of the Apple II, and other examples of old computer tech.

The game was done in under a week.

-YOU WILL GET SMOOCHED

Please ask for permission before redistributing this game in an official or altered form.  If you would like the game to be translated in a different language, feel free to reach out to me.

Was cool the first run (as I didn't die). Played through it again to find that there isn't really a second ending other than dying. Also, choosing different dialogue near the beginning only changes a little dialogue later on as far as I can tell.

Maybe could hopefully add in a good ending? Maybe like a way for me not to leave the game so she doesn't go all evil for me "leaving" her?

I love this game. Melissa is spooky and lovely at the same time (for some reason idk)
For the full experience, I wish I could translate the dialog into Korean..

How can I run it on linux? I downloaded the proper file.

My date with Melissa here went better than my dates usually go, so this was a nice change of pace! Was your choice in naming her Melissa based on the real life computer virus by the same name? It was one of the first internet viruses that spread through email and caused millions of dollars in lost revenue in the late 1990s. Fun little game, I look forward to your future games! I streamed some of it here:

Cool game. I don't know why but I laughed when she said my name. It the small details like being able to name yourself something goofy that make my day. Awesome job.

Same, I made mine something like poop finger because I always write a goofy name. I was not prepared for it to matter. Good chuckle

The girl is cute but I uhh died so yeah err not very cool dude >:(

Reply
Wrath of Wood13 days ago

wow awesome game, each piece of dialog got more sinister as you go on, really cool.

bro i actually do art my guy :insert_here,_an_image_of_spongebob_crying:

i didn't play yet but i can tell already that this is going to be scary ! :)

It's funny because I actually am an artist irl, just look at my profile lol

Very interesting creativity. i like the brand you did to the game.
hope you will enjoy our game too :

Another Island by PurplePanzer (itch.io)

I’m honestly upset that I never got a kiss!! The story was very much enjoyable……CAN I GET MY KISS!!

Reply
menacing_ace18 days ago
really great game I would enjoy a longer experience of this anyways keep up the great work!!
Reply
PrinceFatman19 days ago

what if you just punch the computer

Really enjoyed this. I did so many visual novels on my old youtube channel. So having this and it being horror related was a great experience. thank you high regards for sure a 9/10 this was great

At the Beginning: I like her shes very nice

You would think that this is a normal dating simulator, but next thing you know, you're locked in a meat chamber. I wish I was joking. 🥩

Looks amazing! I'll have to play it! Id love if you guys see my game page ❤

OH GOD IS THIS WHAT THEY CALL "PEEPING THE HORROR"?

edit: no it isn't

Reply
Sloosh!27 days ago(+1)
Ahh! This was so cool! I actually went back and played it a second time! And yes, the jumpscare caught me off guard lol! Well done!
Reply
BLUZZ27 days ago(+1)
For a game made in under a week, this is great given the time constraints SO GREAT in fact its the first game in the video keep up the amazing work!!! <3
Reply
Luadic27 days ago(+1)

Super creative! Donated $15, thank you for turning my dull night into something more fun :)

I Got smooched alright. That was a fun game, very much enjoyed so please make more.

This was great! That dial-up tone took me waaaaaaaaaay back.

Reply
Houssem1731 days ago
Here's my video. Liked this one.
Reply
ungatu31 days ago

Definitely didn't know what to expect with this one but I liked the humor and the commentary. Thanks for the smooches! <3

Reply
Tristantine The Great32 days ago

Quite nice, 10/10 would surrender the world for smooches again.

Yeah, DOWN the contemporary internet, RISE the great Melissa! Let's reboot into the 486 era once again!

this was such a fun experience!! it reminded me of doki doki literature club, that is my fav video game everrrr. really enjoyed it and definately recommend it. 433 smooches 4 u!!!11!!1 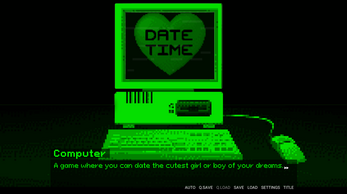 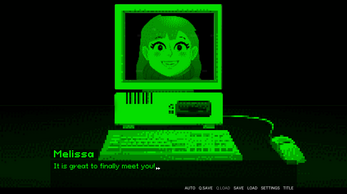 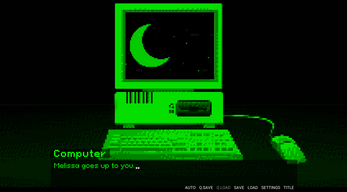