Drew can't get a break, she lives in the worst apartment and eats ramen noodles from a mug.  There is no escape from this dystopic reality, except through the headset connected to the VIRTUAL WORLD.

There she becomes Security Hero 343, an action packed protector of her employer's treasured assets, the tech conglomerate known as, Kaiju Zaibatsu.

Kaiju Zaibatsu promises her great things, but a sly and flirty Cyber-Pirate keeps screwing it up for her.

Will she be successful in stopping this Cyber Criminal, or maybe she has other plans with him??

All Below Kaiju Zaibatsu is a Cyberpunk Romantic Action Comedy about a woman trying to juggle two different identities through a dystopic future, with a cluster of zany characters ranging from violent childish robots to bunny girl bartenders.

This was a 3-month project that started its life as an Otome Game, and kept to its genre challenges.

This game is complete, it is currently considered beta as I continue to test for stability issues with the combat system.

There is also a reported bug, at least in the webgl version where saving and loading can lead to graphical errors and a lock-up.  I deeply apologize for this, and will try to figure out a fix to it for the 1.0 release.

If this happens to you, please use the "Chapters" selection in the main menu, and simply skip to the closest part you lost your save in.

I'm not a regular visual novel player but that one really interested me. It has a cool story with cool characters. Everything flows nice. It's a fun novel to read/play.

There are only two things I need to note:

1, the "bad ending" has a good flow but everything happens so fast compared to the good ending. I know it is supossed to be an ending where you become evil but I think we could  have something there as a reminder that they are people. What happened to the relation of  them after this end? And her sister? Nothing's explained on that evil ending.

2, I've noticed a bug when I was returning to some points with the loading method. Like the character images glitching (the character image did not fit with the situation) and then the game suddenly crashing. Note that I played on the web version so I don't know if  it happens on the .exe version.

Thank you for the feedback!

In terms of the "evil" route, it's more intended to be a morbid curiosity, as opposed to an equivalent to the "true" route, I also felt that continued exploration of the "aftermath" of the evil route would've been too much of a tone change to the story.

However, I can understand your viewpoint, and will definitely consider your feedback in future projects!  Thank you for your openness! :)

Also, yes... thank you for bringing this to attention.  I have received comments from friends and other players about the loading bug prevalent in WebGL.  There is apparently an extension / engine incompatibility that will take some time for me to fix.

I will do my best to release a stable version of the loading / saving function for the web... but it is recommended that if the error happens to you... that you use the chapter selection in the main menu to get back to the most recent part.

I apologize for the inconvenience... I am still pretty new to the development side of Visual Novels, but will do my best to get it fixed eventually.

Hi, I just made an account to say that I loved this game and laughed the whole way through. The artstyle was off-putting at first but really hit different and I grew to love it. Plus, I love how you put late capitalism as a content warning! I was not prepared for that. What a cute romantic and resounding story and I will absolutely be checking back on your future projects. Kudos!

Thank you!  I deeply appreciate it!

You made my day with this! I'm not even really into romance stories, but this is super cute and I love the story and art style.

Thank you very much!  I appreciate it!

I really, really enjoyed this game. The setting feels like it could very well have developed from our current world and seems to parallel how the internet has changed over the past 20 years. This was really well thought out.

I keep trying to think what  Mahou Shojou Darkness might be a reference to. Maybe a slight reference to Madoka Magica, minus the Goth girl. It also made me think of an '80s anime I just learned about called Minky Momo, which had a season or so as a very popular cute magical girl anime making a fortune off merchandise. Then, for no apparent reason, their toy company's sponsor suddenly cut them off. This made the animator so angry, they killed off Minky Momo in what appears to be Truck-kun's first gig, when she is hit by a very symbolic truck full of toys. She reincarnated as a baby and grew up to become a magical girl again, but it kept being emphasized that original Minky Momo was dead (●´⌓`●). No idea if Drew's favorite anime was at all inspired by this or just a really weird coincidence?

I did notice an error with the load menu in that when I loaded my save, it showed (the title background?) instead of the current game's background and it was only corrected when I pulled up the save menu, then went back to the screen. Then I tried to save again later and it froze on the save screen.

Thank you!  I'm very happy you enjoyed it!

Yes, Madoka was definitely a partial inspiration of the character and show!  There was also other anime that had similar "kill-them-all" endings that I based the character off of, many which ended with the Creator being frustrated by either the studio or the way their work was being portrayed.

I actually haven't heard of Minky Momo, but I'll definitely give it a look now! :)

Would you have any more details about this error?  What platform did this happen on?

Sure. I am on a PC using Chrome. I loaded from the main menu and the save point was on the rooftop in Chapter 4, I believe. Hayden had just finished talking to his sister. The character sprites were present but the background was the credits. Once I opened and closed the in game save menu (I don't think I even reloaded from it) it pulled up the correct background.

By the way, wanna say that I really like the art style you developed. It has a slight "anime look," but at the same time it also has a unique cyberpunk style that is quite distinctive. I like generic anime art, but when people experiment like this, it reminds me how much I like it when people do something different too.

Sorry you had that issue!  I wasn't able to reproduce this just yet, but I'll keep looking into it to see if it is a continued issue with the save system.  Thank you for letting me know!

Also, thank you very much, I actually did start out having the game's style be a bit more "anime-like", but pivoted in this other direction around midpoint of pre-production, I'm happy you like it :D 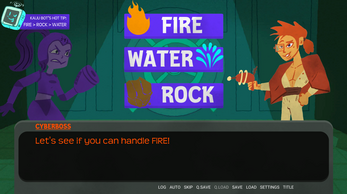 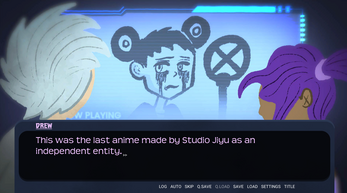 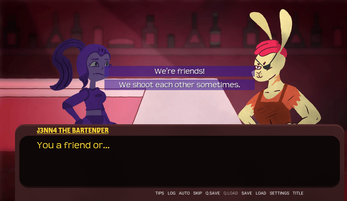 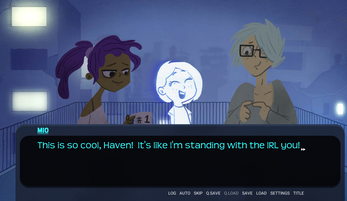 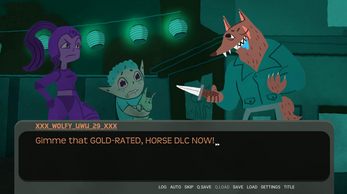